As we move forward into the digital era starting up a business is getting easier. But what if you have an idea & no money to implement it?? Then probably, that business launch is not your cup of tea.

Well, shook off your worries when you can seek for FUNDS!!! Yes, you can give wings to your idea with the option of fundraising.

You may go door-to-door for that purpose or distribute leaflets for hours. But this would be quite a time-consuming task.

One option is to try raising money from investors effectively with the help of Saleshandy.

I can explain you how it can be done with an example.

Mr Oyo is a chef working in BellaMoon Restaurant. He is one among those chefs who can cook the best Sushi across the globe. He thought of
starting his own Sushi Palace where he can sell Sushi.

One day, at his workplace he shared this idea with one of his customers named Dhruv. This man was a tech savvy foodie who used to travel 10 km to BellaMoon only for Sushi.

Mr Oyo had the idea but no money. Both of them caught up in the discussion of how they can implement the idea. And after days of discussion they realised that they also needed funds to kick start their business. Mr Oyo thought of going door to door for funds. But here Dhruv’s passion for technology proved a saviour for them. He introduced Mr Oyo to SalesHandy.

They thought of using the various features provided by Saleshandy for this purpose.

Mr Oyo shot emails to the people whom he thought could be a very good option for raising funds. Dhruv helped him with the ready-made email templates.

But this toiling task did not end here. The other person asked Mr Oyo to meet personally and explain the idea. But that was not possible for Mr Oyo to conduct a meeting since the person belonged to California and Mr Oyo was from Japan.

Dhruv & Mr Oyo explored other options for presenting a live demo and they found quite a bit of them.

Both of them used GoToMeeting to explain their idea to the person from California.

Well, they both were fortunate enough in finding people who were ready to fund their project. With the help of tools available with Saleshandy, they were able to communicate further with the investors.

Basically, there are two ‘i’s’ in FUNDRAISING and they stand for inspiration & innovation. Mr Oyo and Dhruv accomplished their innovation with inspiration in the best way using Saleshandy.

Hope you enjoyed understanding the features of the product with short story. Now you may be able to use Saleshandy for raising funds for your business. 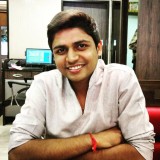 Increase your reply rates by 2X